In 2016, e15 celebrates two decades of stool BACKENZAHN™ with a humorous and poignant installation for the Stylepark Featured Editions at imm cologne exploring the topics intellectual property and copyright infringement. A book titled “copy, right?” by Trademark Publishing featuring stool BACKENZAHN™ accompanies the exhibition and focuses on an artistic interpretation of the subject. With a foreword by design critic Markus Frenzl, photography by Ingmar Kurth and art direction by Antonia Henschel, the book addresses the issue of copyright infringement by presenting a variety of copies of the iconic stool. “copy, right?” is available via Amazon and every bookshop. 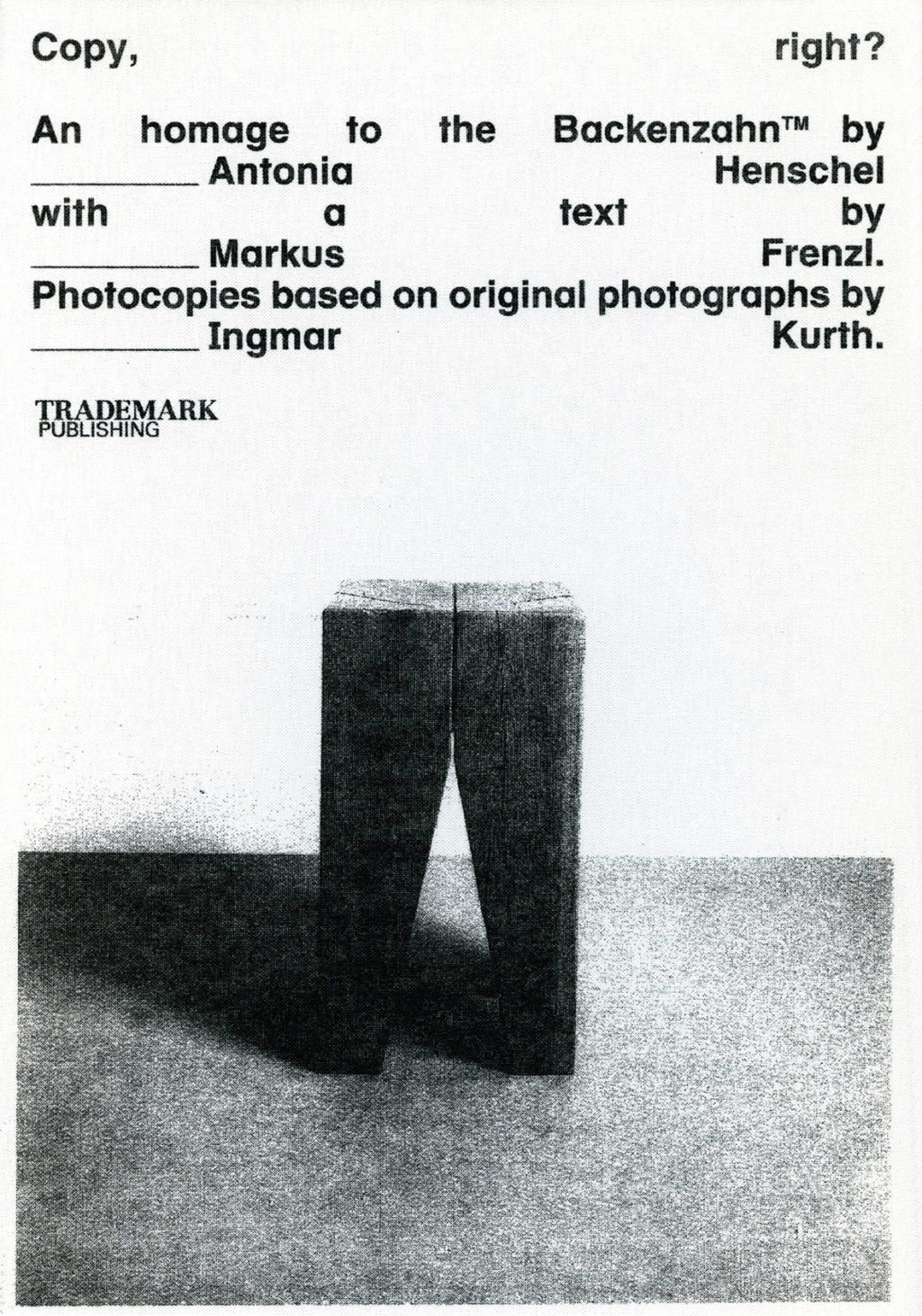 On genuine and fake back teeth

Four blocks of wood, each angled on two sides, connected to one another such that the angled sides run together on the inside, the overall body thus tapers downward and a thin cross-shaped seam arises on the seat itself. Simple geometry. And an archaic presence. Surely, that’s easy for the cats to copy! As soon as the molar stool hit the markets, there were those imitating it. For 20 years now there have repeatedly been copies and quotes of the seemingly simple design. In cheap furniture stores and even in the more up-market solid-wood furniture makers, copied by local carpenters or made of exotic wood somewhere in the Far East, as the high-end version with no knots, without the trace of a seam or with far too great a distance between the individual elements, with shortened stumpy legs, with exposed tooth necks, with distorted proportions. Countless copies of the Backenzahn™ stool pay illegal reverence to a true classic. Some of them are almost touching in their clumsy awkwardness. Some are eager-to-please copies. Some brashly claim to be originals. The molar-shaped and named stool that Philipp Mainzer designed back in 1996 became a statement almost overnight, one that very many wanted to make their own. Even if they had not come up with it first.

It arose from a wish to make good use of leftovers: When cutting the square heartwood legs for a Bigfoot™ table, there were always bits left that were simply too beautiful to throw away. Clamped together, four of them formed a stool, and its poignant symbolic character soon developed a life of its own, something that could be interpreted as expressing any number of different design trends: As proof of the rediscovery of oak and solid wood. As a sign of the renewed link between contemporary design and craftsmanship. As testimony to the yearning for a more natural, authentic life in the age of digitalization. As an object that stood as much for a reduction to the essentials as it did for the wish for longevity that arose in the wake of the short-lived trends of the 1980s. It thus only logically took its place among the ranks of the straightforward stools in design history and was soon included in design collections in several museums. And like the Ulm Stool designed in 1954 by Max Bill, Hans Gugelot and Paul Hildinger, it stands out for its formal simplicity and consists only of wood, eschewing any industrially manufactured elements – many of the imitations evidently read this as an excuse to do as they like.

The Backenzahn™ is not some light, graceful piece of furniture that can serve as a side table here or there in a room. It is not a tree trunk, but with its material properties, the cracks in the wood, it stands its ground defiantly alongside more elegant furniture, polished surfaces, ﬁne fabrics of flawless materials. It is like one of the plain folk in a 19th-century novel, who faithfully follows his heart and therefore wins out over the better-off. A piece of naturalness and authenticity that shows all the sleek, chic items to simply be ridiculous. The stool stands there as if someone simply left a couple of pieces of firewood on the living room floor. And yet on closer inspection reveals a symmetry and balance that you would simply not expect of such a coarse stump. With this statement, the Backenzahn™ became e15’s signature piece, conveying the firm’s core values: the combination of craftsmanship and contemporary forms, the appropriate approach to the materials, the eclectic playful use of contrasts, the balance between visual longevity and formal poignancy. It has accordingly found its way into innumerable apartments the world over. As an eye-catcher in agencies or design-conscious dental surgeries. As a contrasting rustic item in otherwise perfect white interiors. In dozens of photo shoots and on countless covers. Alongside the re-editions of the Ferdinand Kramer furniture series. As an unmistakable icon even in front of the company’s latest designs. As a miniature in a collector’s case. And as a small button on the lapels of e15 staff members. Long since a design classic, the Backenzahn™ will doubtless repeatedly be copied again, re-built, deliberately altered, or involuntarily changed. But there are simply no false teeth that are as good as the originals.